Last month, Auckland welcomed the latest addition to the ever-growing Federal Street Dining Precinct. Housed beside the lobby of Skycity’s Grand Hotel, Masu, a contemporary Japanese Robata Restaurant and Bar, is the latest creation of Nic Watts, who returned to Auckland from London after a stellar career at Roka, one of the most highly regarded Japanese restaurant groups and younger sibling to Zuma. The concept of Watts’ robata restaurant is not solely on the cooking techniques, it’s an overall dining experience where the atmosphere and ambience is just as important. The open kitchen is comparable to a theatrical show where you see some of the chefs work their magic over the hot charcoal grill, slowly cooking the lightly seasoned meat, vegetables and seafood while others create a stunning display of sushi and sashimi at the sushi bar or cook away by the stove.

As we were a table of two, we had the opportunity to sit in front of the kitchen and admire the chefs at work. We ordered a good selection of dishes to share and they came out at different times throughout the night.  Our meal kicked off with two servings of crayfish taco, which is the priciest I have eaten, at $9 a taco. But it was worth it. The seared pieces of crayfish was cooked just right and there was plenty of crayfish in each serving. This was combined with avocado, coleslaw and a spicy miso dressing on a crispy rice taco which added a nice crunch to the overall dish. The chef’s selection of five different sashimi that included John Dory, tuna and kingfish, was artistically displayed on a plate of ice which kept the thick slices of fish cool. This dish is an excellent demonstration of the quality of ingredients used by Masu. The sashimi was fresh and because it was only eaten with a touch of soy sauce and wasabi, the flavours of the fish really shined. 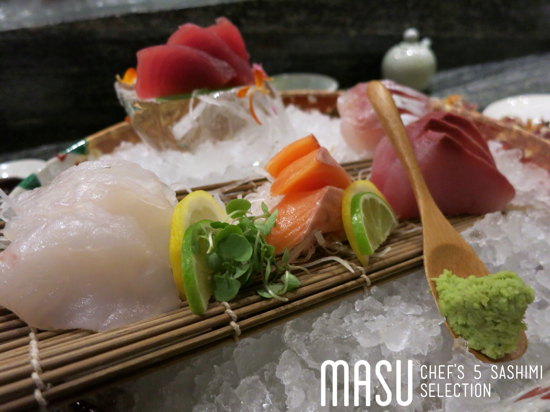 One of their signature dish, the lightly seasoned tuna and salmon tartare was presented like a framed artwork and this was accompanied with a side of the most amazing rice crackers we have ever tasted, it even managed to outshine the tartare! The crackers were light and airy and had a similar texture to prawn crackers, but much thinner and less greasy. It added a crispy texture to the tartare and by the end of the night, we were just eating the crackers on its own. We then moved on to the clam tobanyaki. Clams and crab are my all time favourite seafood, and these clams were some of the largest I have eaten. These were cooked with garlic, chilli and ponzu butter which complemented rather than overpower the natural flavours of the clams 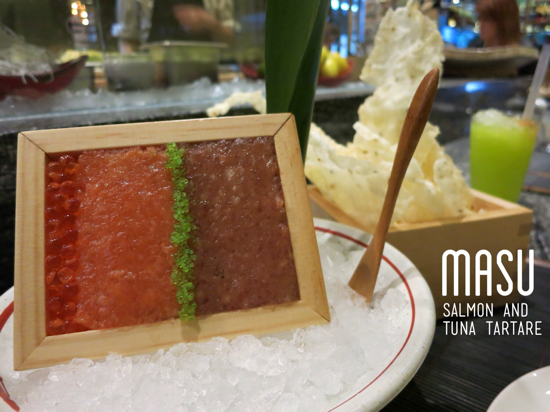 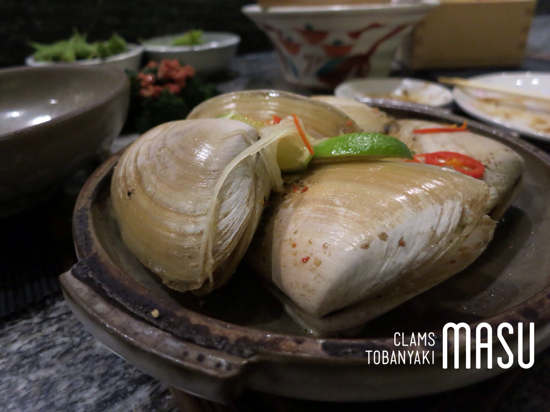 We felt we needed some greens to counter the richness of the seafood, so we opted for the robata grilled long-stemmed broccoli and eggplant. The broccoli, garnished with moromi miso and ginger dressing and the eggplant, flavoured with a sweet ginger miso sauce and garnished with toasted sesame were all perfectly cooked and had a nice grilled flavour. The tempura soft shell crab Maki roll, paired with daikon, cucumber and drizzled with wasabi mayonnaise was a delight. The soft shell crab, cooked in a light tempura batter was crisp and meaty, our only complaint was that it wasn’t enough! 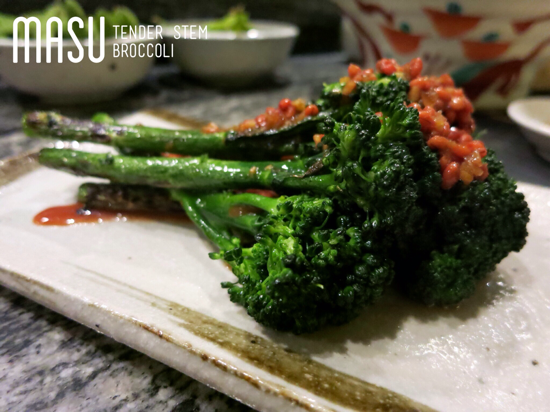 And yes, we left room for dessert (never underestimate how much two girls can eat) so we tried the chawn mushi made with a fragrant mango custard and a pulpy passionfruit sauce, topped with coconut cream and pomegranate. The custard had a light and creamy consistency and it’s important to have a big spoonful, so you can have all the components in one bite. The pieces of freeze-dried lychee was a nice touch.The robata grilled drunken pineapple could have benefited from more time on the grill. The taste of the alcohol was strong and the pineapple has yet to caramelise, a longer cooking time could have easily fixed that.

I thoroughly enjoyed my time at Masu and it is comparable to my lovely meal in Zuma from a few months back. The food was amazing but with great food, comes with a high price. The food is not cheap in Masu, so be prepared for an expensive night. I have to applauded the staff for their attentive service during such a busy dining session and we had none of the bad attitudes that I’ve read in reviews. This place is without a doubt, worth a try.

🏡 | Homemade Potato Hash. . Made me Shredded Potato, Parmesan Cheese, Egg, Paprika, Salt & Pepper. Topped it off with a fried egg! Delicious!
This is too delicious to not share - Cold Pressed Coffee Kombucha by @kombuchabrosnz from ☀ Nelson! . Support small businesses in this uncertain time! They are offering 25% off on their site. Check it out! #notsponsored
🏡 | @myfoodbagnz Maple Roasted Kumura Salad w Sweetcorn Salsa & Creamy Black Beans. . Trying out a vegan dish from My Food Bag and it was delicious!
🏡 | @myfoodbagnz Fish Laksa w Vermicelli Noodles for dinner last night.. . Thank goodness for food delivery, I can avoid the supermarket!